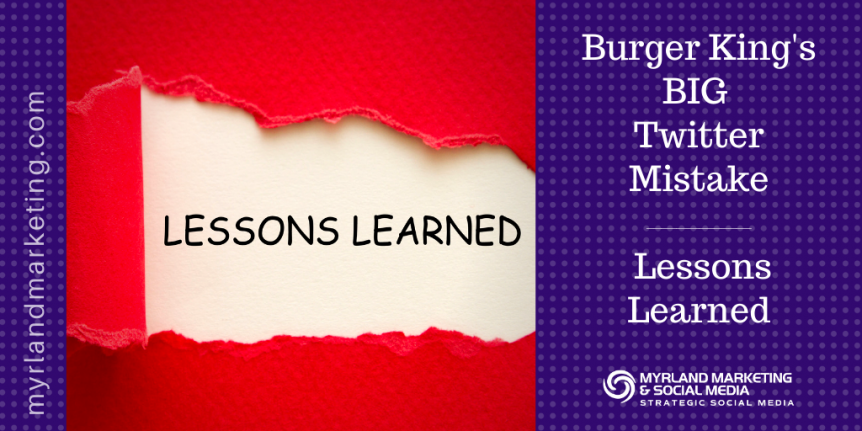 In case you were too busy yesterday to notice the Internet blowing up about Burger King’s social media misstep, let’s take a moment or two to help you catch up, and for me to share my perspective on the situation so that we can all learn from this situation.

We all need to be very careful about being clever on social media. Even if you are the most beloved brand in the world, and I’m not saying Burger King is, but one short Tweet can get you in a lot of hot water…or grease in this case.

“Women belong in the kitchen.   — @BurgerKingUK” 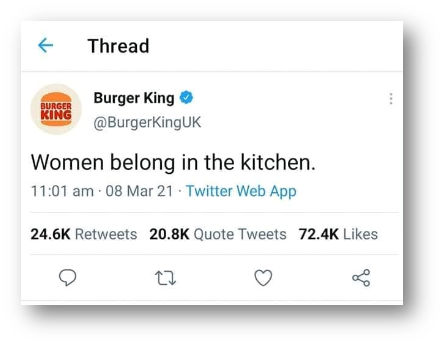 Well, it seems they were trying to cleverly tee up their news about their efforts to provide scholarships to the women who work at Burger King restaurants, which would allow them to move up the ranks to become chefs and head chefs in the industry.

Congratulations on that scholarship effort.

Congratulations on launching it on International Women’s Day.

That is where my congratulatory feelings end.

This isn’t an attack on Burger King just for the sake of piling on. There’s plenty of that running around. Instead, as I have done with United Airlines and another crisis communications preparedness post, I choose to use this as a learning and teaching moment, not only for Burger King, but for those who are watching this situation, wondering what could have been done instead.

As you will see below, I think Burger King has learned its lesson, but it is going to take some time to overcome the ill will it caused by using the teaser approach that they did.

I’ve seen many express the thought that all PR is good PR.

That is an antiquated thought, my friends. If I had Tweeted that, how long do you think it would take you to move past the feelings you would suddenly have about me? Would that cause you to suddenly contact me to help you with a project? No, you wouldn’t.

All PR is not good PR.

As the story unfolded yesterday, many were quick to share a screenshot of an ad that Burger King also placed in the New York Times. The headline was the same, followed by the message they left on Twitter.

“A full-page ad running in The New York Times shows the line in large font and follows with several lines that explain the idea behind Burger King H.E.R. (Helping Equalize Restaurants) scholarship, including the low representation of women in chef and head chef roles across the industry. On Twitter, however, the usage of the line was quickly misconstrued. Burger King U.K. tweeted out just the line “Women belong in the kitchen” on Monday morning, and it was only in subsequent tweets that the intended meaning was explained.” 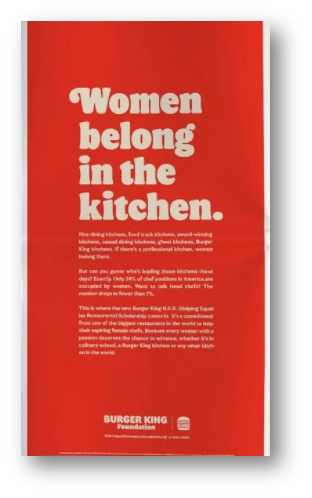 In their article, AdAge and many others across social media reported that:

“Later on March 8, Burger King U.K. deleted the Tweet and explained its reasoning in a separate Twitter post. “We hear you. We got our initial tweet wrong and we’re sorry,” it began in one tweet. A second tweet read: “We decided to delete the original tweet after our apology. It was brought to our attention that there were abusive comments in the thread and we don’t want to leave the space open for that.”

Here are the Tweets that attempted to clean up the mess: 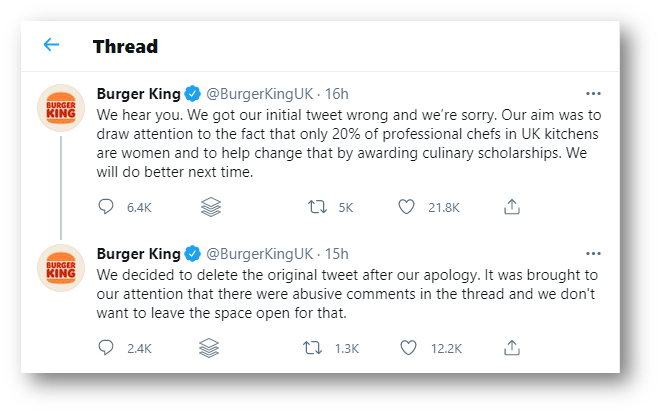 I understand what they did. The discussion was so divisive, abusive, and inflammatory that they decided it would be better to remove the original culprit…the ill-fated but well-intentioned Tweet.

We can all learn from this situation. Here are a few lessons:

How Could Burger King Have Tweeted This Announcement?

What if they had said:

It’s International Women’s Day, and we have some very exciting news. You see, we’ve become very aware that we need to provide the skills, knowledge, and encouragement that will help #TheWomenofBK be promoted to head chef positions in our company. (The character counts might not be perfect, but you can figure this out to make it work for you.)

We can do better. Starting today, we are going to work hard to change that by awarding culinary scholarships to women on our staff because they are the best of the best at what they do, and they deserve to be promoted.

We can do better. This starts today. Listen to a few messages from the women of BK who are now professional chefs. We are inspired by them and have invited them to help us craft this scholarship program so that we do it right.

These Tweets would incorporate messages with photos or brief videos from real women who work at Burger King, including those with aspirations and those who are already executive chefs. Bring this initiative to life by letting us see real faces.

Again, this isn’t an attack on Burger King. They are embarrassed and have told us they learned their lesson. This was a difficult lesson for them to learn, but they owned up to their mistake and attempted to fix it.

Some will forgive them, some will not.

When you are ready to plan a promotion like this, watch the controversial, click-baiting, clever headlines, comedy, and edgy headlines you are tempted to use. They can and will be misunderstood.

Nancy Myrland is a Marketing and Business Development Advisor, specializing in Content, Social & Digital Media. She helps lawyers and legal marketers grow by integrating all marketing disciplines in order to establish relationships and grow their practices. Also known as the LinkedIn Coach For Lawyers, she is a frequent LinkedIn trainer, as well as a content marketing specialist. She helps lawyers, law firms, and legal marketers learn and implement content, social and digital media strategies that cut through the clutter and are more relevant to their current and potential clients. Nancy also works with many firms and lawyers on Zoom and virtual presentation training and coaching to be the best they can be when presenting online.

As an early and constant adopter of social and digital media and technology, she also helps firms with blogging, podcasting, video marketing, voice marketing, livestreaming, and Zoom and virtual presentation strategy and training. She also helps lead select law firms through their online social media strategy when dealing with high-stakes, visible cases.

If you would like to reserve time to begin talking strategy or think through an issue you are having, you can do that here.